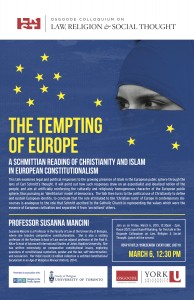 “The Tempting of Europe: a Schmittian Reading of Christianity and Islam in European Constitutionalism” Prof. Susanna Mancini (Università di Bologna)

Department for the Study of Religion, University of Toronto

This talk examines legal and political responses to the growing presence of Islam in the European public sphere through the lens of Carl Schmitt’s thought. It will point out how such responses draw on an essentialist and idealized notion of the people, and aim at artificially reinforcing the culturally and religiously homogeneous character of the European public sphere, thus pursuing an ‘identitarian’ model of democracy.  The talk then turns to the political use of Christianity to define and sustain European identity, to conclude that the role attributed to the ‘Christian roots’ of Europe in contemporary discourses is analogous to the role that Schmitt ascribed to the Catholic Church in representing the values which were the essence of European civilization and separated it from ‘uncivilized’ others.

Susanna Mancini is a Professor in the Faculty of Law at the University of Bologna, 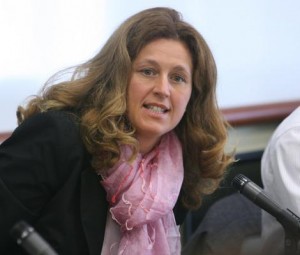 This talk is presented in association with the Religion in the Public Sphere Initiative, at the University of Toronto, Department for the Study of Religion.