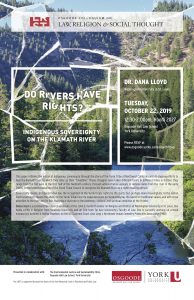 “Do Rivers Have Rights?  Indigenous Sovereignty on the Klamath River”

This paper rethinks the notion of Indigenous sovereignty through the story of the Yurok Tribe of Northwest California and its ongoing efforts to heal the Klamath River, to which they refer as their “bloodline.” These struggles have taken different forms in different times in history: they range from the fish wars of the first half of the twentieth century, through administrative appeals to remove dams from the river in the early 2000s, to the recent resolution of the Yurok Tribal Council to recognize the Klamath River as a rights-bearing person. 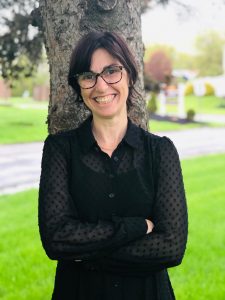 decisions on Yurok everyday life based on traditional values, and with close attention to the river and its fish, that play a vital role in the economic, cultural, and spiritual identities of the Yuroks.

Dana Lloyd is a postdoctoral research associate at the John C. Danforth Center on Religion and Politics at Washington University in St. Louis. She holds a PhD in Religion from Syracuse University and an LLM from Tel Aviv University’s Faculty of Law. She is currently working on a book manuscript, entitled A Hollow Freedom, on the US Supreme Court case Lyng v. Northwest Indian Cemetery Protective Association (1988).