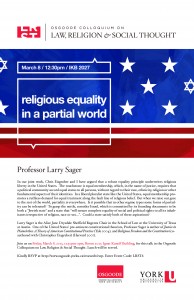 “Religious Equality in a Partial World”

In our joint work, Chris Eisgruber and I have argued that a robust equality principle underwrites religious liberty in the United States.  The touchstone is equal membership, which, in the name of justice, requires that a political community accord equal status to all persons, without regard to their race, ethnicity, religion or other fundamental aspects of their identities.  In a liberal pluralist state like the United States, equal membership promotes a ruthless demand for equal treatment along the fault line of religious belief.  But when we raise our gaze to the rest of the world, partiality is everywhere.  Is it possible that in other regime types some forms of partiality can be tolerated? To grasp the nettle, consider Israel, which is committed by its founding documents to be both a “Jewish state” and a state that “will ensure complete equality of social and political rights to all its inhabitants irrespective of religion, race or sex…”.  Could a state satisfy both of these aspirations?

Larry Sager is the Alice Jane Drysdale Sheffield Regents Chair in the School of Law at the University of Texas at Austin.  One of the United States’ pre-eminent constitutional theorists, Professor Sager is author of Justice in Plainclothes: a Theory of American Constitutional Practice (Yale 2004), and Religious Freedom and the Constitution (co-authored with Christopher Eisgruber) (Harvard 2007). 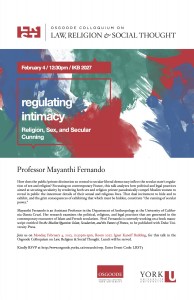 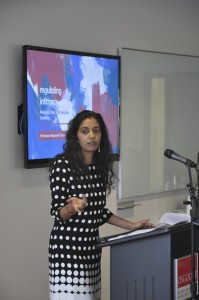 How does the public/private distinction so central to secular-liberal democracy inflect the secular state’s regulation of sex and religion? Focussing on contemporary France, this talk analyzes how political and legal practices aimed at securing secularity by rendering both sex and religion private paradoxically compel Muslim women to reveal in public the innermost details of their sexual and religious lives. That dual incitement to hide and to exhibit, and the grim consequences of exhibiting that which must be hidden, constitute “the cunning of secular power.”

Mayanthi Fernando is an Assistant Professor in the Department of Anthropology at the University of California (Santa Cruz). Her research examines the political, religious, and legal practices that are generated in the contemporary encounter of Islam and French secularism.  Professor Fernando is currently working on a book manuscript entitled On the Muslim Question: Islam, Secularism, and the Future of France, to be published with Duke University Press. 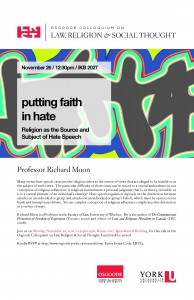 “Putting Faith In Hate: Religion As The Source And Subject Of Hate Speech”

Many recent hate speech cases involve religion either as the source of views that are alleged to be hateful or as the subject of such views.  The particular difficulty of these cases can be traced to a crucial ambivalence in our conception of religious adherence: is religious commitment a personal judgment that is, in theory, revisable, or is it a central element of an individual’s identity?  Hate speech regulation depends on the distinction between attacks on an individual or group and attacks on an individual or group’s beliefs, which must be open to (even harsh and intemperate) debate.  Yet our complex conception of religious adherence complicates this distinction in a variety of ways. 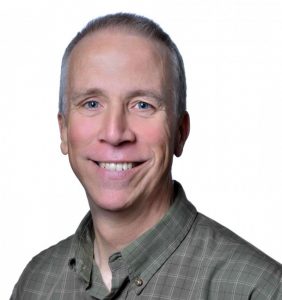 Richard Moon is a Professor in the Faculty of Law, University of Windsor.  He is the author of The Constitutional Protection of Freedom of Expression (Toronto 2000) and editor of Law and Religious Pluralism in Canada (UBC 2008). 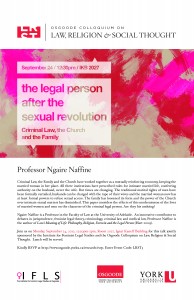 “The Legal Person After the Sexual Revolution: Criminal Law, the Church and the Family”

Criminal Law, the Family and the Church have worked together as a mutually reinforcing economy, keeping the married woman in her place. All three institutions have prescribed rules for intimate married life, conferring authority on the husband, never the wife. But times are changing. The traditional marital rights of men have been formally curtailed, husbands can be charged with the rape of their wives and the married woman now has at least formal powers to refuse sexual access. The family has loosened its form and the power of the Church over intimate sexual matters has diminished. This paper considers the effects of this modernisaton of the lives of married women and men on the character of the criminal legal person. Are they his undoing? 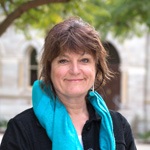 Ngaire Naffine is a Professor in the Faculty of Law at the University of Adelaide. An innovative contributor to debates in jurisprudence, feminist legal theory, criminology, criminal law, and medical law, Professor Naffine is the author of Law’s Meaning of Life: Philosophy, Religion, Darwin and the Legal Person (Hart 2009).