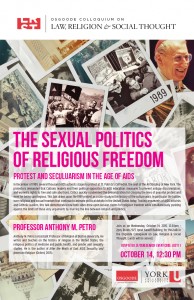 “The Sexual Politics of Religious Freedom: Protest and Secularism in the Age of AIDS” Prof. Anthony Petro (Boston University)

In December of 1989, several thousand AIDS activists staged a protest at St. Patrick’s Cathedral, the seat of the Archbishop of New York. The protestors demanded that Catholic leaders end their political opposition to AIDS education, measures to prevent antigay discrimination, and women’s rights to free and safe abortions. Critics quickly condemned the demonstration for crossing the lines of peaceful protest and even for being sacrilegious. This talk draws upon the 1989 protest as a case study in the history of the culture wars, in particular the battles over religious and sexual freedom that continue to animate political debate in the United States today. Tracing arguments of AIDS activists and Catholic leaders, this talk demonstrates how both sides drew upon secular claims for religious freedom while simultaneously pushing against the limits of these very arguments by blurring the line between religion and politics. 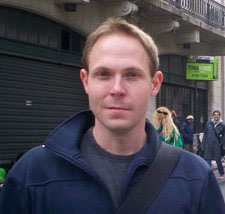 Anthony M. Petro is Assistant Professor of Religion at Boston University. He writes and teaches on the history of religion in the United States, the religious politics of medicine and public health, and gender and sexuality studies. He is the author of After the Wrath of God: AIDS, Sexuality, and American Religion (Oxford, 2015)