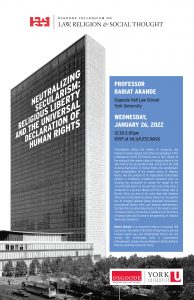 Contestations pitting the notions of secularism and religious freedom against each other are ubiquitous in the contemporary world. This tension was, in fact, integral to the making of the modern notion of religious liberty in the aftermath of the Second World War. Article 18 of the 1948 Universal Declaration of Human Rights, the paradigmatic legal encapsulation of the modern notion of religious liberty, was the product of an impassioned contestation between a Protestant ecumenical movement keen on securing the prerogative to spread the gospel to the “non-Christian world” on the one hand, and, on the other, a secularism in a peculiar alliance with the colonial state in Muslim Africa, an area of the world that held immense attraction for the global missionary enterprise. Through the lens of struggles between global protestant missionaries, transnational Muslim elites, and imperial administrators, this talk offers an alternative history of the modern notion of religious liberty, intervening in debates over the history of human rights and its place in the genealogy of religious liberty and secularism. 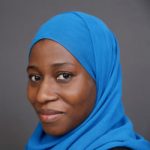