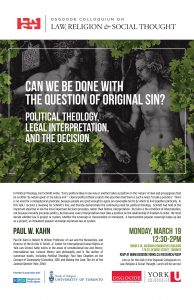 “Can We be Done with Original Sin: Political Theology, Legal Interpretation, and the Decision”

In Political Theology, Carl Schmitt wrote, “Every political idea in one way or another takes a position on the ‘nature’ of man and presupposes that he is either ‘by nature good’ or ‘by nature evil.'” Liberal political theory rejects the assertion that there is such a need “to take a position.” There is no need for a metaphysical predicate, because people are good enough to agree on reasonable terms by which to live together politically. In this talk, I recover a meaning for Schmitt’s line. and thereby demonstrate the continuing need for political theology. Schmitt had hold of the important idea that in law the most important decision precedes, rather than follows, interpretation. Decision is the condition of interpretation, not because morality precedes politics, but because every interpretation must take a position on the relationship of 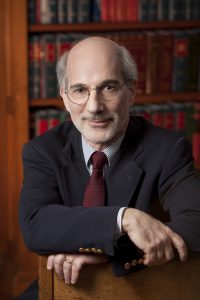 Paul Kahn is Robert W. Winner Professor of Law and the Humanities, and Director of the Orville H. Schell. Jr. Center for International Human Rights at Yale Law School. Kahn works in the areas of constitutional law and theory, international law, cultural theory and philosophy and is the author of numerous books, including Political Theology: Four New Chapters on the Concept of Sovereignty (Columbia. 2011) and Making the Case: The Art of the Judicial Opinion (Yale, 2016).