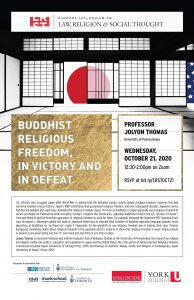 “Buddhist Religious Freedom, in Victory and in Defeat”

U.S. officials who occupied Japan after World War II claimed that the defeated country totally lacked religious freedom. However, this tidy narrative masked a messy history. Japan’s 1889 constitution had guaranteed religious freedom, and over subsequent decades Japanese clerics had fiercely debated and vigorously defended the religious freedom clause. Yet even as Buddhists in Japan generally used religious freedom to secure privileges for themselves while excluding “foreign” religions like Christianity, Japanese Buddhists living in the U.S. Territory of Hawai`i tried and failed to get the American guarantee of religious freedom to work for them. For example, although the landmark 1927 Supreme Court case Farrington v. Tokushige upheld the right of Japanese Americans to educate their children at Buddhist-operated language schools, racist depictions of Buddhism as “un-American” made it impossible for the plaintiffs to use religious freedom law in making their case. Thomas juxtaposes competing claims about religious freedom in 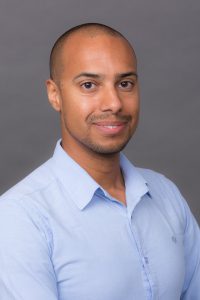 the Japanese and U.S. empires to show that religious freedom is never simply present or absent in any given polity, nor has “it” ever been just one thing in any time or place.

Jolyon Thomas is Assistant Professor and Interim Graduate Chair of Religious Studies at the University of Pennsylvania. His research on religion investigates media, law, politics, education, and capitalism in Japan and the United States. He is the author of Faking Liberties: Religious Freedom in American-Occupied Japan (University of Chicago Press, 2019) and Drawing on Tradition: Manga, Anime, and Religion in Contemporary Japan (University of Hawai`i Press, 2012).