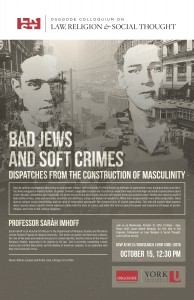 “Bad Jews and Soft Crimes: Dispatches from the Construction of Masculinity”

How do cultural assumptions about religion and gender interact with criminality? In their historical attempts to understand crime, biological and racial theories have smuggled in implicit notions of gender. Similarly, ideas about religion—or its absence—made their way into both legal and media conversations about crime. Because Jewishness has historically lay at the nexus of race and religion, this talk will explore historical moments when Jewish men stood accused of high-profile crimes. Jews and non-Jews, scientists and attorneys, clergy and laymen all weighed in. While their disagreements were often predictable, these diverse cultural voices nevertheless had one area of remarkable agreement: the characteristics of Jewish masculinity. This talk will explore what happens when conceits about a gentle Jewish manhood collide with the facts of crimes, and what that tells us about the power and endurance of images of gender, religion, and crime in the cultural imaginary.

Sarah Imhoff is an Assistant Professor in the Department of Religious Studies and the Borns Jewish Studies Program at Indiana University.  She writes on gender and American Judaism, the role of the body and medical discourse in Jewish identity, and the history of the field of Religious Studies, especially in its relation to US law.  She is currently completing a book manuscript entitled Masculinity and the Making of American Judaism, to be published with New York University Press.